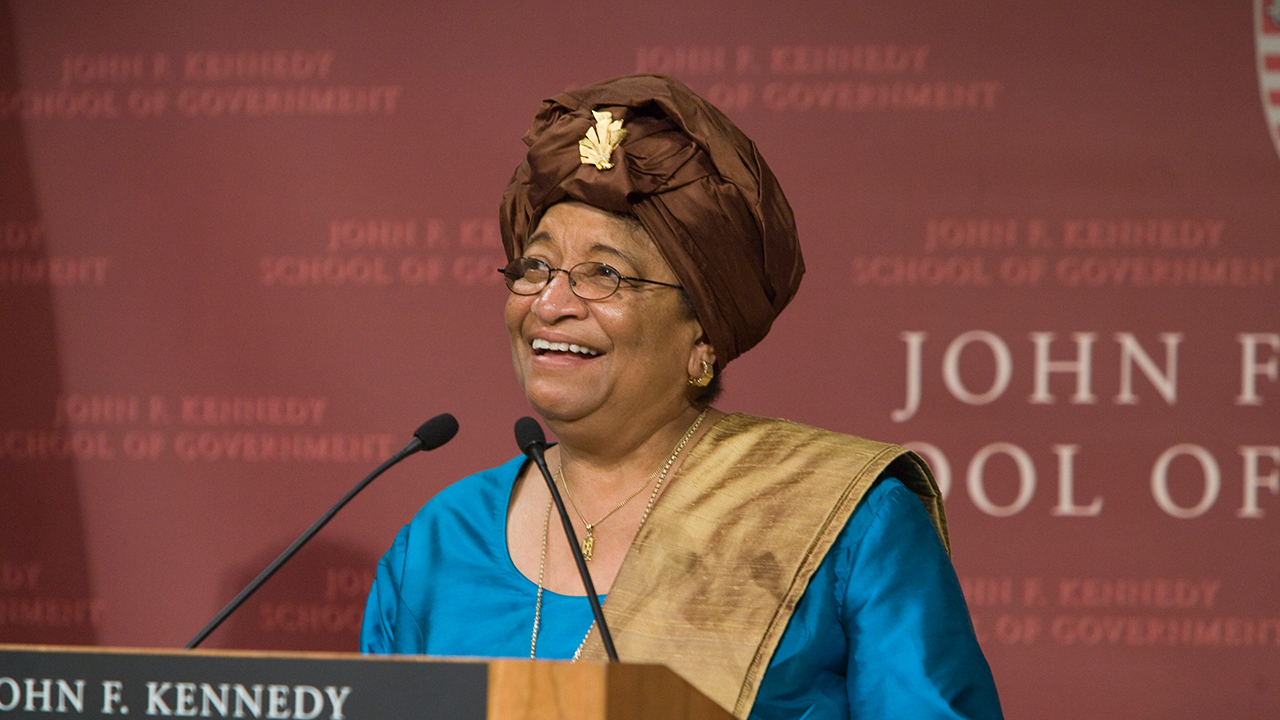 Ellen Johnson Sirleaf: From HKS to the campaign trail

Liberia has gone to the polls to elect a new leader 12 years after Ellen Johnson Sirleaf MPA 1971 was elected as the first female President in Africa.  Here’s a look back at her journey on the campaign trail.

Chanting back, “Who wants the mansion key? Ellen wants the mansion key!” they clearly were ready, helping to turn this 67-year-old economist, known everywhere by her first name, into the first elected female president—not only in Liberia, but also on the entire African continent.

Just a few months after that trip, Johnson Sirleaf, a former Mason Fellow who continues to come back to the school for speeches and the annual Women Waging Peace conference, stood on the grounds of the capital building in Mon­­rovia—just down the road from the “mansion”—and took the oath of office, ushering in what headlines and hopefuls all over the world are waiting for: a new beginning for Liberia.

Her election couldn’t have come at a better time. Although the 14-year civil war ended in August 2003, the country, founded in 1847 by freed American slaves, is still in shambles. Unemploy­ment is a staggering 80 percent. The national debt hovers at about $3.5 billion—a crippling amount when compared to the country’s national budget of about $80 million. During the war, which left 200,000 dead and another 1 million displaced, nearly everything of value was looted or destroyed. Entire villages were razed. There is still no piped water and very little public electricity—the latter something Johnson Sirleaf has pledged to restore within six months.

Her critics say the challenges are too great; her supporters, who affectionately call her “Iron Lady,” say she’s tough enough for anything. And the proof, they add, is in her history.

In 1980, for instance, while serving as the finance minister, she escaped death when Samuel Doe staged a bloody coup that killed then-president William Tolbert and 13 members of his cabinet, each one stripped, tied to a pole, and executed by firing squad.

Five years later, following a speech she gave that was critical of the government, Doe put her under house arrest, then in prison. After two months, she was charged with sedition and sentenced to 10 years hard labor. Thousands of Liberian women signed a petition and the international community, including members of the Kennedy School, wrote letters. She was released, only to end up back in prison for seven months with other members of her political party, this time for treason.

More recently, during the election, she faced 22 opponents, all men, including a wildly popular soccer star, and won nearly 60 percent of the vote.

When asked by an American television anchor what she’d say to someone who believes she’ll be a soft leader just because she’s a woman, she says: “Try me. You’ll be shocked.”

“The Iron Lady, of course that comes from the toughness of many years of being a professional in a male-dominated world,” she recently told The New York Times. “But also the many young people we have here, and the suffering I have seen, and the despair and lack of hope, brought out the motherliness in me, and that is where the Ma Ellen comes from.”

Speaking to another reporter, she added, “Now, I’m most concerned with being a mother to Liberia. I want to heal the deep wounds of this nation, particularly among our youth. One must show loving care to them. One must be motherly to them and make them feel wanted.”

Today, with four grown children and six grandchildren, Johnson Sirleaf is already doing that by insisting that every child be given a chance to get an education, something that fell apart during the civil war, when schools were destroyed and parents needed wage earners. Addressing tribal leaders during her first full day in office, she said: “Don’t let your children go in the market. Don’t let them on the farm. Let them go to school.”

She is also intent on making the women in her country feel wanted—and heard. Before the election, she told Newsweek: “We’re knocking at the door, and there is a little crack in it. If I win, many other women will push on it. And then it’s going to open.”

She has vowed to put women in her cabinet. As of January, several had already been named, including the ministers of finance and gender and development. She agreed to pay benefits to war widows and even began processing the claims. During her inauguration speech, she said her administration would provide programs for women to assume their “proper place” in the economic process. And, shocking to many, she did something no other Liberian public official had ever done, certainly not in an upbeat inauguration address: she spoke out against the rape of women—a taboo topic that she knows firsthand, having almost been raped during her imprisonment.

“We will support and increase the writ of laws that restore their dignity and deal drastically with crimes that dehumanize them,” she said. “We will enforce without fear or favor the law against rape recently passed by the National Transitional Legislature.”

This sensitivity to the plight of women comes in part from her upbringing, a mix that has made her, she says, a “bridge” for cultural, economic, and ethnic divides. Although born in Monrovia to educated parents, she comes from humble village roots. Her two grandmothers, Jenneh and Juah, whom she acknowledged in her inauguration speech, were illiterate. Her mother was born into rural poverty, but was sent to live in the city to be raised by a stranger, when her German father had to flee the country during World War I, after war was declared on Germany. Johnson Sirleaf’s father, also born into rural poverty and sent to Monrovia to be raised by strangers, eventually became the first native representative in the National Legislature.

Just weeks after taking office, this bridge builder is now being received at events like a rock star. At the recent African Summit in Khartoum, Sudan, for instance, “Old Ma”—yet another one of her nicknames—“electrified” the crowd, reported one newspaper.

“The media mobbed her, observers applauded, and women sang as she swept past dressed in a white African dress and green headscarf,” the reporter wrote. “Her appearance brought the summit to a temporary halt.”

Many hope that this attention and adoration will keep the African nation in the spotlight and will lure Liberian exiles back.

“In my judgment, she is one of few Liberians who has the knowledge and international standing to rebuild the country from its current state,” says Kennedy School student Jackson Wonde MPA 2006, who is from Liberia. “She brings to the job skills and abilities that might encourage other qualified Liberians to return home and serve their country.”

Tiawan Gongloe, a former Carr Center fellow who recently moved back to Liberia and will serve as Johnson Sirleaf’s solicitor general, believes they will.

“Her election has created enough space for everyone, both in the private sector and the public sector, to make whatever contribution that is necessary for the rebuilding of Liberia. It is an opportunity that all well-meaning Liberians cannot and should not allow to be wasted.”

Some, however, fear a resurgence of violence, especially from disgruntled warlords and political leaders no longer in power.

“Much of their disenchantment is based on fear, fear that they will be brought to book for corruption or human rights abuses, and I’ve assured them there will be no witch hunting, there will be no looking for skeletons in the closet,’’ Johnson Sirleaf told reporters.

She says she is not worried about her own safety.

“My security is the people. I think it is guaranteed if I do the right thing and make sure people feel like their basic needs are being met,” she said in a recent Pan African journal. “We will try to undermine the attempts of those who seek to do evil.”

When asked if she were to lose her life while in office, would it have been worth it, Johnson Sirleaf says: “Yes, even if I have to make the ultimate sacrifice, which is my life—it will be worth it. We need only now to put our country on the course of renewal, and I hope I’ll have enough time to get this started. If I don’t, others will carry it on.”