When reimagining community safety, we most often think in terms of the police (whether or not or when to rely on them) and policing (reforms that might improve community members’ sense of safety). Prosecutors, however, are critical to our experience of community safety. To the extent that they help to create more effective accountability measures and co-produce community safety with the communities that they serve, they are central actors in bringing about the type of change that historically marginalized communities crave. Rachael Rollins, Suffolk County (MA) District Attorney, has established a reputation as a progressive prosecutor who is committed to reforming the penal system in ways that could help realize greater fairness, justice, and equity for those directly and indirectly affected by the system. DA Rollins offered insights into how we might realize a reimagined system that protects and serves us all. 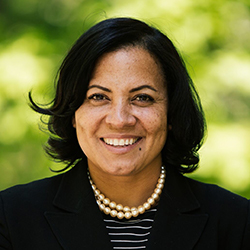 Since taking office, Rollins has implemented humane and data-supported policies to keep Suffolk County safe. Policies that no longer criminalize mental health issues, substance use disorders, food and housing insecurities, and immigration status, instead focusing her limited resources on the most violent and serious crimes.

Rollins was a Governor Deval Patrick appointee to the Judicial Nominating Commission, a past president of the Massachusetts Black Lawyers Association, and served a three year term on the Boston Bar Association Council. She is a proud resident of Roxbury, where she lives with her daughter, two nieces, and French Bulldog Cassius.