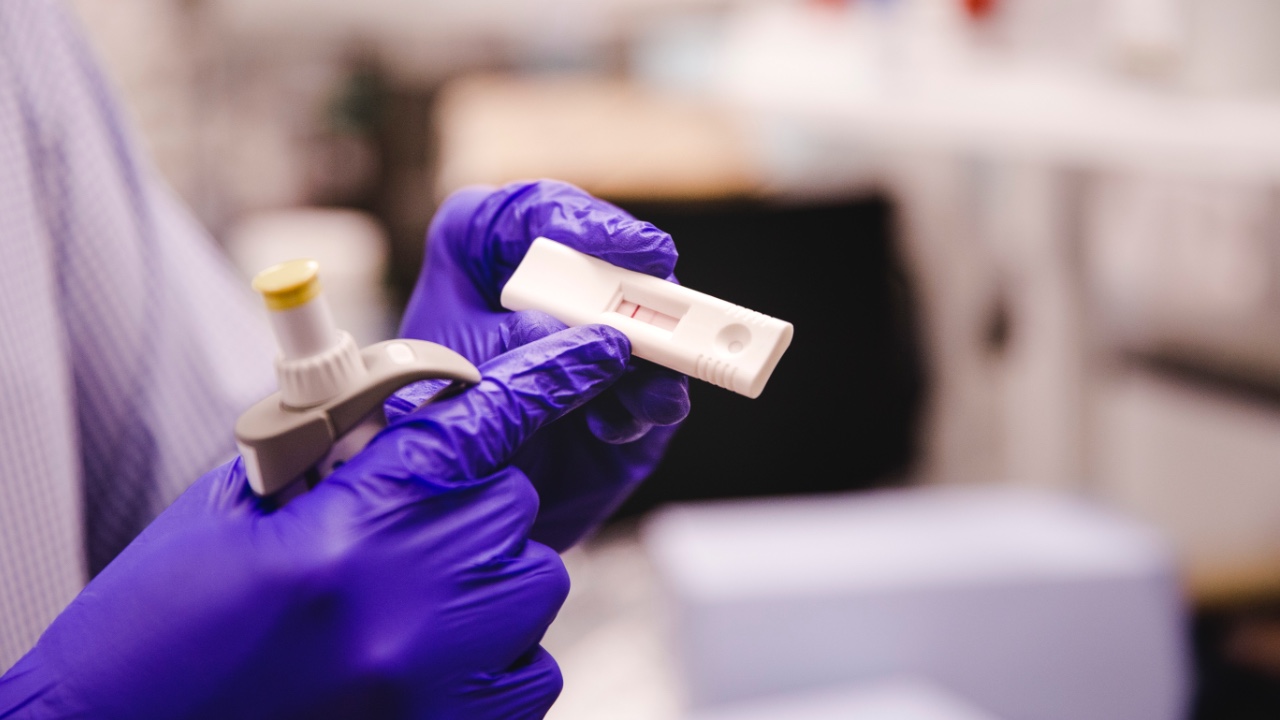 Behind the 3-inch plastic device is a tale of innovation and perseverance, and the hope that it can save thousands of lives. Health workers will use it to conduct a urine test, much like a pregnancy test, to quickly and cheaply determine whether patients at high risk of getting HIV are consistently taking their prescribed preventative drugs. It’s the brainchild of Giffin Daughtridge MPA 2017 and the team at UrSure, Inc. Daughtridge co-founded the company while at Harvard Kennedy School and it is now seeking regulatory approval to market the device in North America, Africa, and Europe.

Q: What made you want to become a doctor and help vulnerable populations?

I had a tumor when I was 15. A lot of different doctors kept seeing me. My family was torn up. Both my dad’s parents had died from cancer, and he was so upset. I saw doctors being a comforting influence and I thought, That’s what I want to do for people. Then, following my undergrad where I was pre-med, I went to Colombia as a Fulbright scholar. I was studying vaccination coverage rates for hepatitis B. What I saw was that people like sex workers, who really needed the vaccine, weren’t going to the hospital to get it. It dawned on me that we have some amazing preventative technology, but the people who need it most are the ones least likely to access it, because they’re the most detached from the health care system and most stigmatized. So I started a program down there to vaccinate sex workers. Instead of having them go to the clinics, we brought the vaccines to them on the street.

Q: How did those insights evolve into UrSure?

Every year 40,000 people in the United States still get HIV. If you’re a gay black man in America, you have a one in two chance of getting HIV in your lifetime. So in medical school, my co-founder, Dr. Helen Koenig, and I started a clinic for young gay men of color where we prescribed a drug that can prevent HIV transmission. We thought access was the big piece—that if we could get the drug to the people, that would take care of it. But we saw that several guys still became HIV positive because of poor adherence. There were two main problems: We didn’t know who was and who wasn’t taking the drug, so we wanted a way to measure actual adherence and not self-reported adherence; and people didn’t feel any different when they took the drug, so we wanted a way to show them that the drug was in their system. We developed the lab-based urine test as a way to address those two issues.

Q: How do you balance your for-profit business model and your social mission?

When we started the company, the goal was to get this point-of-care test to patients as quickly as possible and to scale that up. We felt like research or a nonprofit were not the fastest ways to do that. But a for-profit company that could go out and get funding and get private investments could scale that up very quickly. Today, every decision we make focuses on how we can scale up our tests to as many patients as possible. If we have millions of people worldwide using our tests, that would be a commercial win, but it also delivers on the social-impact mission that underpins why we’ve done this from the beginning.

Q: What made you want to come to a school of public policy, and how did it help you?

As a medical student who studied biology and Spanish as an undergraduate, I had never taken a stats class, never taken an econ class, never taken a finance class. HKS gave me the skills and global perspective that my clinical training lacked—like negotiation, communications, finance, and strategy—and I call on these skills every day leading UrSure.