Mohammed Abu Asaker: Working toward a day when there are fewer refugee stories to tell | Harvard Kennedy School
Skip to main content

Mohammed Abu Asaker: Working toward a day when there are fewer refugee stories to tell

As a spokesman for the UN refugee agency, Mohammed Abu Asaker MC/MPA 2019 has dedicated himself to telling the stories of people ripped from their homes by war, famine, and persecution. 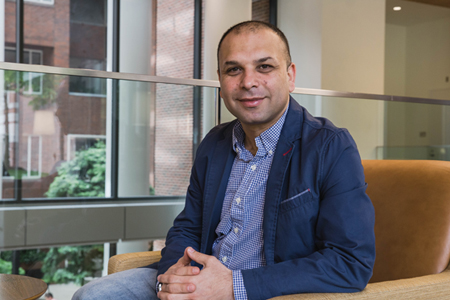 After a year at Harvard Kennedy School, Abu Asaker, an Edward S. Mason Fellow, wants to work for a future where there are fewer stories to tell. His goal is to solve the political problems that are at the root of the suffering he has seen, both as witness and participant.

With more than 17 years working in the humanitarian field, Abu Asaker has served as a spokesperson for the Office of the United Nations High Commissioner for Refugees (UNHCR) since 2012. He has been deeply moved by the many stories, both tragic and triumphant, he heard and witnessed from refugees from Syria, Iraq, Yemen and the Rohingya people.

“No one chooses to be a refugee,” says Abu Asaker, who grew up in refugee camp in Gaza and attended United Nations Relief and Work Agency refugee schools. “Living in a refugee camp means that there is no clear vision for the future; everything is unknown and nothing is guaranteed. In my role as spokesperson for UNHCR, I have been able to serve as a voice for the pain, agony, hope, and inspiration of refugees. Stories affect us. They make us want to act.”

No one chooses to be a refugee. Living in a refugee camp means that there is no clear vision for the future; everything is unknown and nothing is guaranteed.

His daily work allowed Abu Asaker to make the stories available to the world via the media as well as the UN’s own communications channels. He also mounted UNHCR’s largest ever digital fundraising campaign, leveraging social media to raise awareness about the refugee crisis and garnering more that $15 million in relief aid from the public to supplement the agency’s own resources.

Now, Abu Asaker plans to transition to peace-building. To accomplish this, he applied to the Kennedy School, knowing that he had to equip himself with the knowledge and skills to understand both the nuances and broader strokes of global policy.

“My personal mission is to bring peace to the Middle East,” Abu Asaker says. “I want to bring adversaries together to promote peace and save lives. My journey will be full of challenges, I know. Yet, it’s possible.”

“The Mid-Career Mason program has been a bridge to help me get where I want to go,” he says. “It has been a transformational year. I wish I could spend five years studying here.”

Abu Asaker concentrated his coursework on international and global affairs, negotiation, and developing soft skills. Particularly impactful were courses that incorporated hands-on tools for policy-making that required him to think and act from a policy perspective.

In Great Power Competition in the International System, taught by Roy and Barbara Goodman Family Professor of the Practice of Diplomacy and International Relations Nicholas Burns, “we looked at the interconnected balance of power across the whole world, not just the Middle East and North Africa, where I had been focused,” Abu Asaker says. “It broadened my view so I can understand the larger policy picture.”

And in Getting Stuff Done: Leadership and Execution in Global Affairs, a course taught by Belfer Center for Science and International Affairs Co-Director and Lecturer in Public Policy Eric Rosenbach, Abu Asaker and his classmates examined global sphere policy issues, heard from visiting experts, and tackled practical aspects like writing policy notes and briefing decision makers—making sure to write with the audience in mind. “It’s not just about what I want to write, what points I want to make, but also how to make sure I’m heard,” he explains.

He also learned from his Mason Fellow classmates, some of them refugees. “I would love to see more refugees studying at HKS,” he says. “They have so much to offer. Because they have lost so much, they see what a difference they can make, what there is to be gained. It’s a unique and rich perspective.”

After graduation, Abu Asaker hopes to join the UN’s political affairs department so he can transform the story of refugees: through diplomacy and peace-making, he hopes to reduce the number of war-torn stories he’s told so many times. Ultimately, he plans to go back home to Palestine and engage in the peace process between Palestine and Israel. “My vision is to see Palestinian and Israeli children playing together.”

What gives him hope? “People,” he replies. “This is a man-made conflict, and so people can make a difference because they have heart. There is love in each and every heart that we can connect to. People on both sides deserve to live in peace.”

He echoes his earlier words: “It’s possible.” Perhaps the most human story one can tell.